Increasing water scarcity issues in India. What is the solution ?

The water crisis in India is a problem faced by the country. It has been described as one of the most severe water shortages in the world, with more than half of its people living in areas where there are acute water shortages. The government of India has taken several steps to address this issue. As part of these efforts, the National Mission for Clean Ganga (NMCG) was launched on 2 November 2000.

The NMCG aims to clean the Ganges River and make it available for drinking and bathing by 2026. The government has also set up a committee called the Inter-Ministerial Group on Integrated Management of Watersheds to coordinate policy development pertaining to watershed management by all ministries concerned. In addition, the Ministry of Drinking Water and Sanitation has created a task force to improve access to safe drinking water in rural areas.

The Indian Government's response to the drought that affected many parts of the country from 2011 to 2012 included the opening of 22 new dams. In 2015, the federal cabinet announced the Central Ground Water Board (CGWB), which would be responsible for managing groundwater resources across the entire country.

What are the causes of water crisis in India?

Water shortages have been a common problem in many parts of India. According to a report by Centre for Science and Environment, more than 10% Indians face severe or acute scarcity of drinking water. The problem is compounded by lack of clean drinking water, inadequate sanitation facilities, poor management of urban resources, and lack of awareness about water conservation.

Water shortage has led to problems like droughts and floods. In fact, according to the Central Pollution Control Board, there were over 2,500 incidents of drought in 2009. This year too there was an increase in drought-like situations as per data from the Department of Hydrology & Meteorology. A major reason for this is that due to climate change, our rainfall pattern is changing.

Which state in India has water problem?

According to the World Bank report, Delhi is one of the most affected areas.

New Delhi/Mumbai: The drought situation in India is more acute than ever before and it will only get worse unless immediate action is taken, a top government official said on Thursday. Drought has intensified across many parts of the country, while crop failures have been reported from several regions including Maharashtra and Karnataka.

The monsoon season began late this year due to which farmers are already facing problems. With just 10 per cent of their normal rainfall so far this year, they are struggling to meet the needs of their crops.

What is the main cause of water scarcity in India?

Water has always been a scarce resource. But in recent years, it’s become even scarcer in many areas of India due to an increased demand for irrigation and industrial activities. This has led to a rise in the number of farmers who are facing drought-like conditions.

The government has taken several steps to address this situation by providing financial assistance to those hit hardest and also improving systems for capturing rainwater. However, there are still serious challenges that need to be addressed before we can solve this problem.

Water resources are under severe stress because of high population density, poor agricultural practices, and increasing demands on them for industry and energy use. More than two-thirds of the total renewable water sources (TRWS) across countries.

What is the effect of water scarcity on crop production?

This question can be answered by referring to many articles and studies. However, to answer this question we need to understand how plants use and take up water from soil. Soil contains a variety of nutrients that are necessary for plant growth such as nitrogen (N), phosphorous (P) and potassium (K).

These three elements are termed macronutrients and they provide raw materials like proteins, nucleic acids and carbohydrates. But these elements also play an important role in stabilizing soil structure and controlling soil pH.

Water availability plays an essential role in the plant uptake of nutrients and the plant’s ability to thrive. It also maintains the balance between plant growth and stress responses. When there is not enough water,

How can we prevent water scarcity?

Water is one of the most important resources for human life. It is essential to our survival, and yet it is a resource that many people lack access to. This is especially true in developing countries, where about 800 million people do not have clean drinking water or adequate sanitation facilities.

The United Nations has set an ambitious target: to ensure everyone on Earth has access to safe drinking water by 2025.

But progress towards this goal is still slow. To reduce the number of people living without access to clean water by 50 per cent will require major improvements in water supply and sanitation systems worldwide.

To help meet this challenge, UN-Habitat commissioned a study from McKinsey & Co., which looked at how cities around the world could improve sustainable urban development. One of its recommendations was that governments should put greater emphasis on ensuring all residents have access to sufficient quantities of fresh water over time.

In addition, the report suggested that local authorities should consider setting up new water markets and encouraging private sector investment in water infrastructure.

In India, the shortage of water poses a serious threat to food security. Some regions face acute shortages while others struggle with chronic water deficits. How can we address this problem?

The first step towards addressing this issue is to monitor the situation regularly. India has developed a national system called the Integrated Water Resources Management System, which monitors and reports the status of different water bodies across the country. 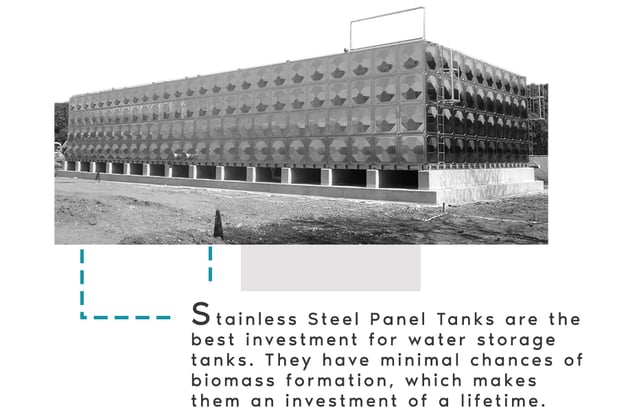 For more information regarding our stainless steel panel tanks download our product brochure by clicking the button below, drop us your requirement on sales@beltecnoindia.com  or call us on any of the given numbers +91 9116009580/+91 7300084028